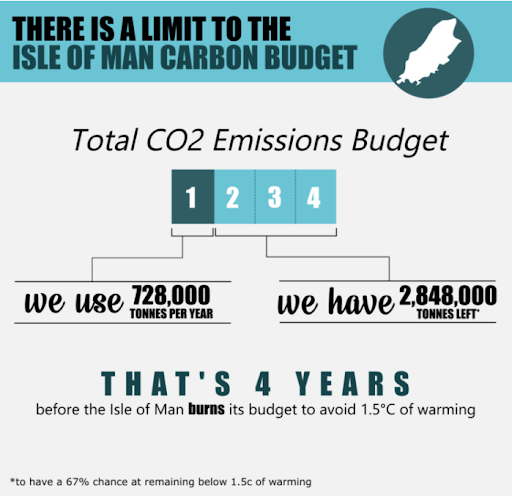 The Isle of Man only has four years remaining before it burns through its entire carbon budget to avoid 1.5°C of heating of our planet. The Isle of Man Green Party has published its Second Carbon Budget for the Isle of Man (which can be found HERE), setting out the amount of carbon dioxide (as a share of the global carbon budget produced by the Intergovernmental Panel on Climate Change) that the Isle of Man is allocated to burn from before global average temperature rises (above pre-industrial levels) are reached that will cause climatic changes such as increased incidences of droughts, floods, sea level rises, and storms in the Isle of Man and elsewhere.

Per person, the Isle of Man is a significantly high emitter of carbon dioxide.  The Isle of Man has a greater per person carbon dioxide footprint than countries such as China, Germany, the UK, and India.  The consequences of our emissions will have a direct impact upon the Isle of Man, with low lying regions in Ramsey, Castletown, Douglas, and in Peel, being exposed to the risk of annual flooding by 2040 on the current trajectory of sea level rises.

The Isle of Man Green Party is a registered political party building a sustainable vision for the future of the Isle of Man. Further information can be found on the Party’s website www.greenparty.im and via email at committee@greenparty.im.